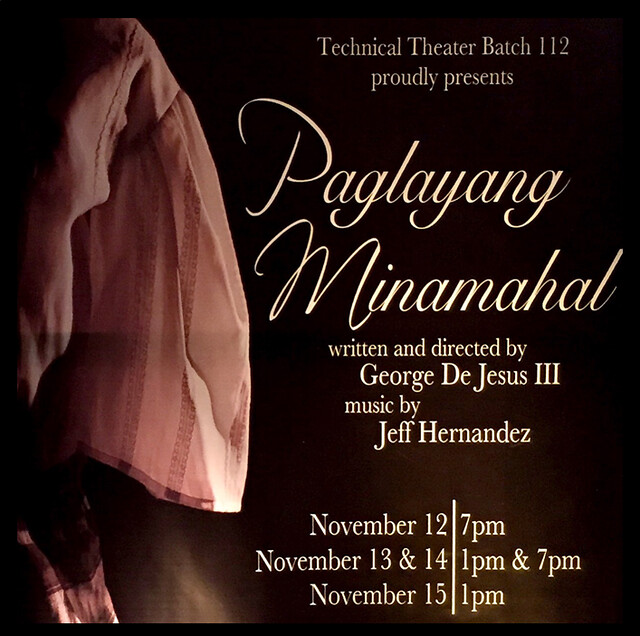 Paglayang Minamahal artistically dances to the rhythm of kundiman, folk song, culture, and life in the time of the Philippine Revolution.

It was written during the 1998 Philippine centennial celebrations. It placed 2nd in the sarsuela category of the Centennial Literary Competition.

Paglayang Minamahal is a typical love story of an educated, young, and rich man (Mauricio) who falls in love with a lady (Alodia) from among their household help. While the lovers meet and anticipate great things on their relationship, an arrangement has already been made by Doña Maura, the mother of Mauricio and the father of Señorita Carmela for their children to marry. Also entangled in the love story of Mauricio and Alodia is Joselito, their childhood friend and servant in the hacienda. Accused to be part of the Katipuneros, Mauricio is seized by the Spaniards and throws him into prison together with Alodia’s father. Together with the Katipuneros, Alodia bravely frees Mauricio. Unfortunately, Mauricio and Alodia gets separated in the scuffle of battle. After the escape, Mauricio slowly regains his strength while Alodia is still missing. Many concluded that she has not survived the war but Mauricio otherwise remains to be hopeful unless he sees the grave of Alodia. On the fateful wedding day of Mauricio and Carmela, Mauricio requests to see the grave of Alodia before the ceremony. At the cemetery, however, Mauricio finally meets the grieving Alodia. The lovers kiss and embrace in a dramatic longing of a love that has survived the tragedy of war.

As a fan of theatre, this is my first sarsuela. I have only learned about this Philippine artistry in class. The sarsuela is produced by the thesis class of batch 112 of De La Salle – College of St. Benilde. It was written and directed by Palanca winner George de Jesus III. Notwithstanding obvious technical glitches, it is a show for which the entire production team can truly be proud of.

Before the show, I was only hoping that I will not be bored and lulled to sleep. Surprisingly, the script is excellently written. I never knew kundiman sounded good and very interesting. Kudos to the musical director, Jeffrey Hernandez.

Paglayang Minamahal transports the audience to a cultural past we can truly say… taas noo, ito’y sariling atin.